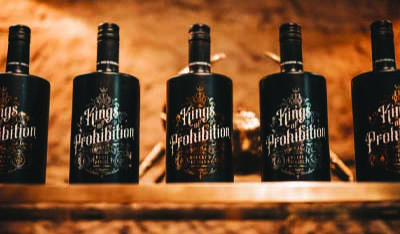 A craft-design inspired wine, telling the story of the Prohibition era in the United States during the roaring 1920’s which led to speakeasies drinking establishments and bootlegging of alcohol.

Kings of Prohibition wine range has been developed by Calabria Family Wines, using bespoke packaging with an aim to bring innovation to the wine industry. “The brand story of the Prohibition era is compelling and we all agreed that strong packaging was required to really tell the story,” commented Sales Director, Andrew Calabria. “The bespoke matte-black wine bottle, has gone against all traditional wine bottles, which is bringing something new to the industry. The proprietary bottle took over three years to develop with multiple trips to Europe to finalise the product specification. It is unique and probably not everyone will agree but our aim was to shake up the wine category and create something different in the market.”

The packaging is already receiving accolades, taking home a Double-Gold label design award from the 2018 San Francisco International Wine Competition. In terms of the story behind the brand, Prohibition is one that has eluded the new generation. “I am a lover of history and I have always looked back and read the history of Prohibition and the flow on effect repeal had in 1933,” Andrew said.

“It changed the wine industry and opened the door for innovation, essentially wine was reborn, and it created great wine brands which are still impacting the wine industry. Without Prohibition, winemakers would not have explored styles such as Fume Blanc or White Zinfandel. From the great era of the roaring twenties, Prohibition gave rise to the notorious ‘Kings of Prohibition’. During this dry period myths were born and the stories of bootleggers; such as Al Capone, Bugsy Siegel and Lucky Luciano, who became infamous and set the path for wine distribution around the world.” “I truly believe that telling the story of winemakers and terroir is important, however, it is easy to get lost when the rest of the world are telling the same stories. Kings of Prohibition is less complicated, the brand tells a story that is significant in the history of wine, while still delivering high quality wine produced from two great Australian winemaking regions; Barossa Valley & Hilltops,” Andrew said. Calabria Family Wines has created two wines under the Kings of Prohibition label for the Australian market: the ripe, juicy and full forward Barossa Valley Shiraz and a Hilltops Tempranillo which is refined and opulent. The wines are delicious drinking right now, but will cellar well over two years and are perfect with smoked BBQ’s and beef sliders.